Monday after work we went up to the barn so I could lunge Henry. He has been turned out for a bit earlier in the day but I still wanted to work him. He was SO lazy.. normally he loves to run a scream in the lower big round arena/pen but nope... maybe he is grown up? It was in the 80's so not too hot.

I worked him in both directions... giving walk breaks... then some more work.

Cooled him out and then decided to give him a really fast "bath" .. he hasn't had a real bath is months. We are on water conservation so I just hosed him off and did a quick all in one body soap and called it good. Better then nothing right? At least I feel like he smells less. Still need to do a real bath, scrub his legs, wash his face, shampoo and deep condition his mane/tail and clean his man parts.

Then I conditioned his mane and tail, fly sprayed his body and loved on him before taking him back to his stall with a tiny bit of grain so that I could add his supplements and electrolytes.


Hubby so kindly picked out Henry's stall. They finally replaced the kick board that they took out months ago so his mats and shavings have actually been staying in his stall!! It felt like we were pulling the mats back in 2-3 times a week FOREVER and I am glad that that is over! 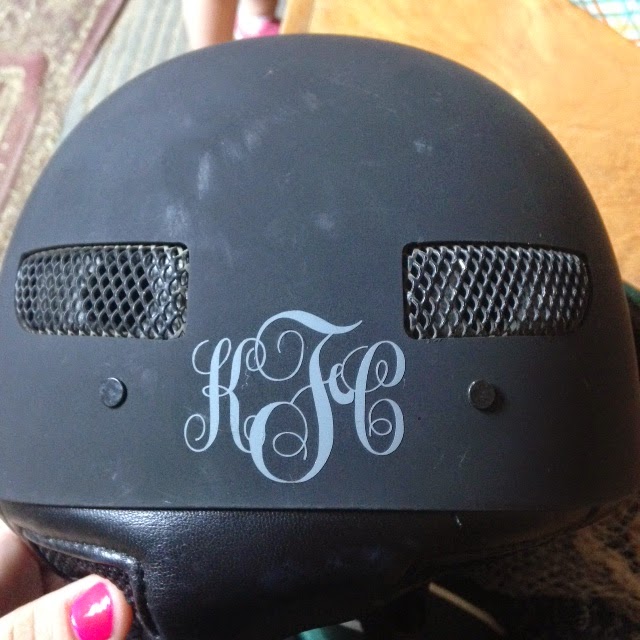 I finally took a pic of my helmet monogram :) I put it on weeks ago but kept forgetting.. not what to use the other two monongrams on... hmmm. And I think I need a crop one now!

Those of you who have done it to your breeches and gloves, how do you like them?