Hey Henry- that was NOT cool!

He just about gave me a heart attach last night...

I didn't take a lunch yesterday so I could leave early and ride Henry before hubbys softball game. I was on a tight timeline so my head was down and i was focused.

Got Henry, tacked, lunged and rode. I was the only one in the arena so we were on a mission and had the whole arena to use :) They had opened the sliding doors at the other end of the arena (one end is always open, the other end isn't and the sites are fixed walls). We had a few spooks but no blow ups... the moving shadows on the walls were the scariest I guess.

I hacked him around.. worked on straightness per my trainers instruction and transitions/extended trot/bending per my instruction haha!

After riding I groomed Henry and then put him out on the hill to graze while I cleaned up. I went out to grab him and put him away and noticed he was COVERED in hives- I just about freaked out! I quickly called my trainer and dragged him to the barn to see if Laura was still there. Between the two of them they talked and we gave him a shot of something to help counter the reaction. He wasn't fazed by any of this hoopla- curious why I was stressed and why he wasn't in his stall eating his grain.

So I put him back and went to survey the hill where he was- and low and behold he had rolled in stinging nettle. Stinken horse!

Henry isn't allowed out in the stinging nettle anymore!

On that note here is a super cute baby picture of Henry I borrowed from his Canter blog :) Way to cute!!! 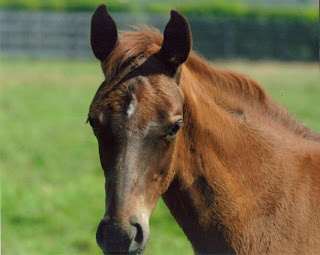