New Stuff and Day 1 of the Show

Thursday I came home to some much anticipated stuff :) 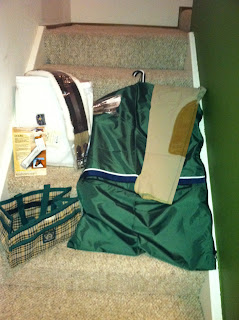 Grooming tote for the show, clippers, new saddle pad (though I desperately want the Fleeseworks one that L Williams has), TS Hunter Trophies breeches and a new garment bag.


Friday I spent the morning with Bayley and then headed to the barn to load the horses and a few other  things  that we didn't pack Thursday night.

The horses loaded well and the drive up was good. I followed the trailer in my car so that we would have a car to dive back and forth in and so I had a vehicle if there was an emergency with Bayley... though I did get hit by a rock from a truck and a nasty chip in my windshield that grew over the drive appeared. 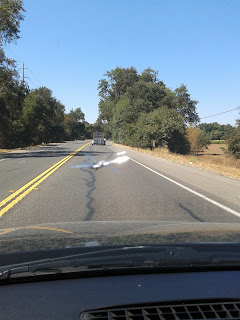 We got to the show, unloaded, made up our stalls, tacked up and hacked. I took Henry down to one of the spots designated for lunging to see if he had any steam to blow off. After the lunge I got on and headed to the arena where I would be showing- Hunter Ring 2. We hacked around and he was really good. Then moved onto jumping all the fences ... again he was good. I rode in the Mikmar (even thought I couldn't show in it) and had a well balanced and good horse- got all my changes too :)

I went and hung out in Hunter Ring 1 while Lysstte jumped. He was calm cool and collected and didn't flinch about anything.

When she was done we both headed back to our fancy barn/stalls for the weekend- auto fly spray, sprinklers in ever stall, wash racks in our isle, grooming stalls, vacuum, nice big clean isle way... you get the picture. I am not sure how we got hooked up with the nice barn but am super thankful!

Bathed the boys, loved on them, fed them dinner, loaded the car with our tack/clothes and stuff for the hotel... drove to the hotel, unloaded and then went over to a super yummy dinner- including awesome margaritas!

After dinner we grabbed candy, cleaned tack and went to bed... someone signed up for the 2nd class of the day so we had to be up early! :)