Hubby has to work last night so I had roughly 1.5 hours to get everything done at the barn and get home.

Got Henry, tacked up, lunged and got on. Trainer was still there so she told me to ride in draw reins. When we are in the arena alone- Henry tends to be bright eyed, head up and bushy tailed! It's like his frame goes out the window so she said to hack him in them so that he has to stay.in.a.frame!

I warmed him up then got to work.

Transitions was the game of the night.

About half way through the ride he was at a point where he was listening to my body SO well that I barely had to use much leg and he was sharp as a tack to do what I wanted- AWESOME!

I ended letting him trot around on the buckle and all was good in our worlds :) 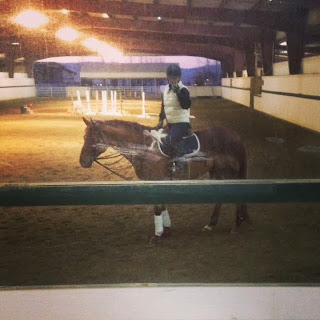 Cooled him out, untacked, groomed, blanketed (plus blanketed 2 other horses) and took him home with his grain and hay.

I had made a super yummy soup in the crock pot so a warm dinner was waiting for us all!