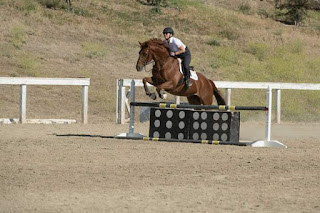 Apparently I need to go back to learning how to steer lol!

The weather has been triple digits lately so trainer held a morning lesson Monday.. WS, Kat and I were there. I was a tad later then them because I wasn't quite sure when we were getting on. Luckily WS had a couple horses to ride so I flatted while Kat jumped and then got a private jump lesson which was much needed...

The course changes a tad so here is a new pic :) 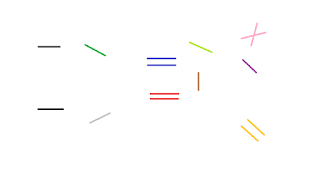 Warmed up over the pink X back and forth.

After a few times through that trainer broke it down and we did some refining...

We did the red oxer to the light green vertical... I had to come into the in and out (red oxer) straight and turn over it to the light green. I wanted to come in at an angle so that we were pointed at the green but trainer wanted me to not take the easy route haha! It took a bit for us to do it a few times right so that we could move on lol!

Then we did the gray wall to the domino wall (black vertical at the top left corner). Thankfully that was quick ha!

Then we did the brown (mustache) to the purple... i had too much speed so we had to work on really going slow so that I could get the 4 stides in there.

Lastly we did the light green to the red oxer... had to go over the red straight which is harder then you would think, angling it was way easier but not what trainer wanted lol! 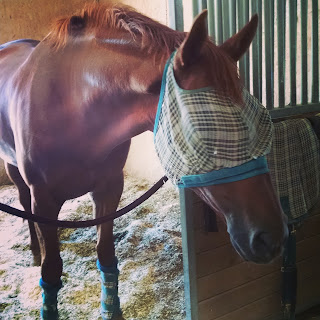 I was SOOOO tired after it. I think I did too much cause I was super shaky and couldn't get off Henry, I had to walk him over to my truck and pretty much fall into the truck to get of. Then I sat on the cool ish concrete floor and Kat so kindly brought me something frozen from the freezer to put on my neck while I drank my water.

About 15 min later I was able to clean up Henry and get back to our regularly scheduled program.

Horse cleaned, tack cleaned and off to In and Out to meet the hubby and girls!
Posted by Karley at 8:00 AM