Monday I hacked after dinner in the evening. It was a just get Henry out and move around  before our outing Tuesday ... and I talked to Erica through almost the whole thing haha!


Tuesday morning we loaded up and headed out to another barn to school. I hitched up all by myself, go me! If you have done that with a bumper pull you know the fun that it is alone haha!

Tacked up and got on ... Henry was bright eyed but I just had to ride through it. A few scoots here and there but it feels great to be able to ride through that and not stress :) 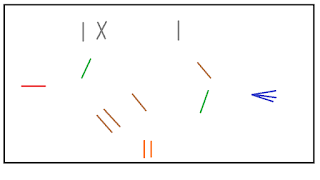 The red, orange and blue were probably 2'9
The green and first jump in the gray were prob 2'6
The brown and rest of the gray was prob 2'0-2'3

It was a fun mix of new jumps.

Henry gave a hairy eye to the wood crate thing with no standard but other then that we jumped everything great.

I really liked working on the trot jump in the middle of a canter course b/c we had to do that at the show in March and it was a miracle that I trotted it at the show. When he gets going on course he gets in the zone and trotting isn't on his mind lol.

I love going to new places and having a great horse under me, bring on another show!!

Wednesday is turn out day for Henry :)
Posted by Karley at 7:00 AM