The title says it all...

My goal for tonight was to work on our walk/canter transitions.

Got Henry, tacked him up, lunged and climbed on. There were a few other people riding so we joined the party. I trotted around the arena two laps to get a lay of the land and then went to work on my walk/canter transition goal. The first transition wasn't as crisp as I would like it (it really wasn't bad BUT not what I wanted) so we cantered a bit (since he got the right lead and did pick it up I didn't want to stop him and punish him) then walked and worked on more transitions both directions.

He was really on point with his responsiveness and I was SO proud!

We had a little cat issue- apparently it was going to eat us alive- but being that he had to focus on our transitions that luckily is wasn't what it could have been.

Since Henry was so good for what I was asking and our goal was reached (and someone came in with a wild horse to lunge) I decided to end there. It wasn't a long ride but it was totally a super productive one. I walked a bunch and cooled him out- he was a bit sweaty so I wanted it to all dry.

Un-tacked, groomed, grained and put him away (also cleaned his stall and filled his water). 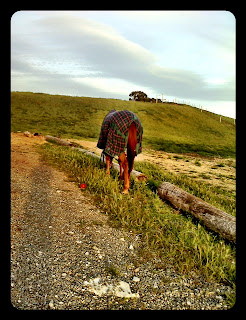 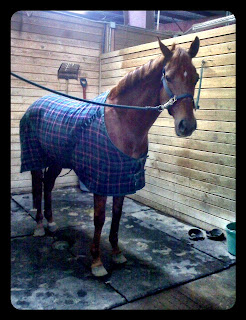