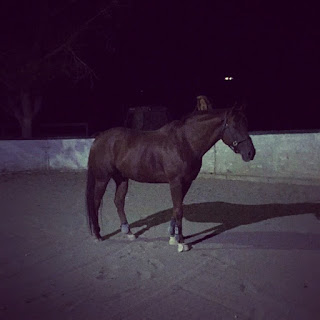 Monday I was able to squeeze a hack in ... late night but hey I will take it!

There was a lesson going on so I just rode around it.. we have more and more "trainers" with these riders who are interesting to ride with. Henry and I aren't bothered by them but you never know where they going, what they are doing or if the rider or horse is in-charge lol! 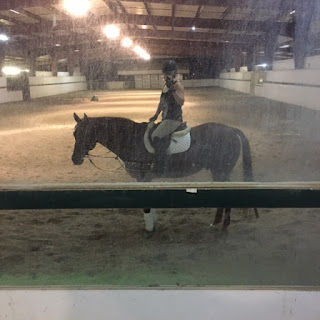 Back to my ride. Henry was great! It was still hot so I just got on. Walked around a bunch- then just went through the paces - mixed in some counter canter... it was just a solid hack. The "trainer" that was giving the lesson complimented me on what a nice horse he is and how balanced he is. 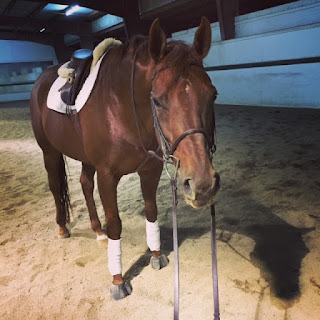 We were both pooped by the end :)

Tuesday he got some turn out and I went to a barrel race with the bff.. it was really nice to have some time to go out without the girls and just chill- I needed it since hubby has been working so much.

Wednesday I squeezed another hack in before hubby had to scoot off to work again.... Took B with me and we got a Starbucks treat on our way...

Groomed, tacked up and got on... had the place to myself!


Walked working on pushing his hip around to warm up... then went to trotting and lots of changing direction and yielding him off my leg.

At the canter I did more leg yielding and also changing direction and holding the counter canter... he did awesome and was listening so well! I didn't make it easy on him either and he stepped right up!

I love you Henry! Thanks for a great ride!

Let him roll in the round pen after he was done... he loved it and got so dirty.