Hubby has a crazy work schedule leaving me little to no time do ride, now I will throw myself on the floor and have a fit.

Ok I am over it now.

Monday Henry got the Chiropractor and turned out.

Tuesday I didn't get to the barn till 6:20 ish so no lesson for me.

I tacked up, lunged the wild horse- the weather cooled down and he was CRAY!- then got on as the lesson was ending and coming back up to untack... I went inside to and got to work.

Henry was still high so I just tried to ride him down... his brain works so much better when he is tired lol!

I worked on moving his hind end around, much better to the right after the chiro! Also a little shoulder in and haunches in.

Also really going into the corners on the open end despite him sure there was something out there the first few times. Thankfully he got over that quickly :)

Then just going through the paces and not being heavy (ha thats a joke right?!). Lots of cantering  and good transitions! 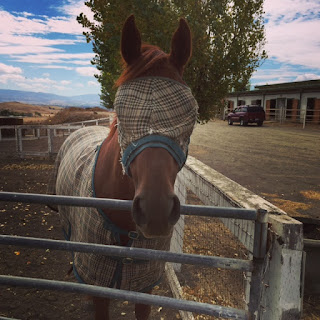