Monday I headed out to ride Henry...

Once he was done I crawled on and we got right to work... he rode SO well and felt so good.

Really nice in the frame- I remembered to keep  my hands up and leg/hand.

I got him cleaned up and headed out to Graysons second cowboy ride. 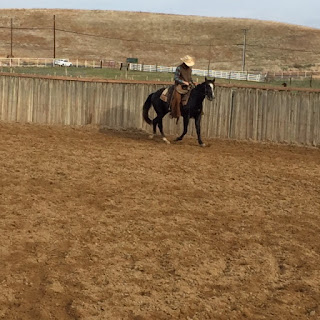 Cowboy took G and headed into their cutting pen, there were cattle in there too... G has seen cow from a distance but never been that close to them. He took it all in stride from what I saw.

Cowboy just put him to work and acted like the cattle weren't even there. 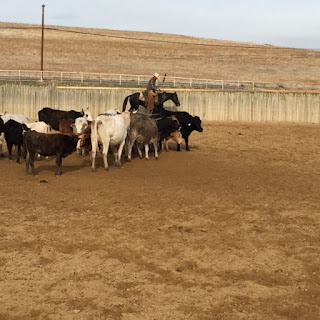 Rocky was so excited when we went into the cutting pen to watch, he LOVES to chase cattle lol.

G did really good and only scooted once or twice at the end when they were putting the cattle away and they were a tad fresh and came running at him. 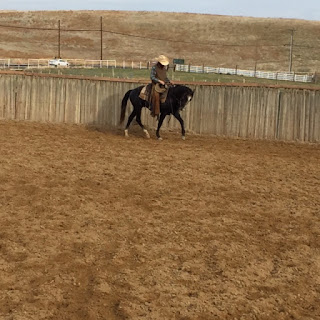 He's doing more following his nose and giving his face. I really like how Cowboy lets go of the other rein when asking him to come one way or the other with his face, really makes it easy for a baby to understand and no confusion.

My homework was to work on changing direction and making him move forward off my feet right away... Cowboy says he is a little too laid back lol!

Tuesday Henry got the day off and Grayson got cleaned up (and then he rolled when I turned him out after making him stay in the stall with grain for a bit to dry- gerrrrr) and wormed- exciting stuff :)