Monday I just lunged (well let him run around) the big round pen... it was windy as all heck! Ever time a gust of wind came and went up his bootie he would go faster or bucks or look at me like I was playing a bad joke on him- which I wasn't but boy was it funny to watch! Anywho got him out and let him blow off some steam and then made him work a little, cooled him out, groomed him and fed him his crunchie munchies as Erica says.

Tuesday night I rode after work inside with Erica and Laura. There was LOTS going on... chatting, people riding, loud noises, people popping out of the dark, people moving jumps from storage, the tractor moving hay around.. you get the point. Henry took most of it in stride, a few spooks but nothing big. I like that he is getting exposed to all of the crazy stuff- will make horse show and all the hustle and bustles less of an issue right?!!? Or so that is my hope!
Anywho he was good- we just hacked. WTC. Worked on more sitting trot- I can't seem to get it consistently how it should be but each ride it is getting better. Also worked on his left lead- only took two time to get it right. It baffles my mind that a horse who raced doesn't pick up the left lead automatically- he defaults to the right. Oh well - one more thing for me to work on :)

Wednesday I off shifted at work- or so I planned to but ended up working for 2 hours in the morning- and rode with the others who are off work or school or home from college. It was fun to ride with a group...
Henry didn't want to pick up that left lead again. Unlike Tuesday it took us a million times to get the left lead. I know it's part me and part him but I feel like I should be able to get this and am not sure why it is challenging me so much. My trainer pointed out that he isn't listening to my leg like he should and that I need to use my stick to get him to listen better. After a few smacks he was more attentive and responsive but I would like him to listen without having to utilize the crop- that will come with time I suppose.
The beginning of our ride was ok .. I felt like he was distracted and not really paying attention to me so we did stops and backups BUT from how the cantering went, I can tell I didn't do enough of that I guess.
I have been tasked with making him move his hip/honches over and getting him to listen to my leg. Trainer said after I have warmed him up to make him do this and eventually work at it in the trot too. Move stuff to work on :) Story of my life- but hey I want to always be learned and progressing, never being complacent in my riding ability!

Hopefully I get to ride tomorrow night- if not maybe Friday morning!

Next week I hope to start Henry OF... I talked to my trainer about this and she said that shouldn't be a problem and that we will probably have Juliana take him over a few the first time. Yay for making progress! (hopefully haha) 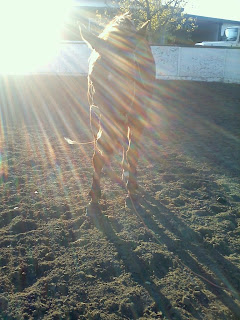