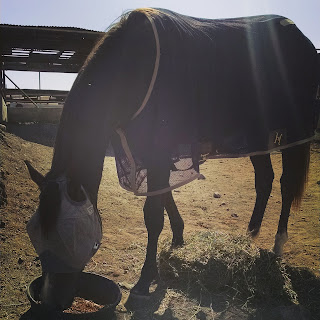 He still is his chill, laid back, nothing bothers him self... well except spray bottles. I have been using them since the DAY I got him but he just isn't a fan. Could care less about the bottle but when you spray it, no thank you. It's like someone is getting after him with it, but I have had him since he was 6 months old so I know he wasn't beaten with one!

He's still getting lots of handling, had a saddle/bridle on, ponying, trailered places and loving life out with his bff Rocky :)

I am starting to think about what I am going to do with him. I think I am going to send him to a cutting trainer, probably when he is 3, that is kind of local so he will get exposed to cattle, buffalo, other stuff and maybe I can even go take some lessons and learn the buttons that are being installed.

He loves the girls, even follows Addison around in the stroller- not scared at all and it's too cute!

Hoping to get him some easy boots this week cause his toes are a little tender and shoer wants to wait a bit longer to shoe him. I was hoping he would be ok without shoes but it doesn't look like it. Sad days but it's ok, we just want him happy :)

So right now that is the plan... it could change haha!
Posted by Karley at 6:00 AM