29th- Turn out and grooming

30th- Turn out and grooming

31st- Since we had the festivities of the holiday, I only had time to lunge in the BIG OL round pen down by the covered arena. It's not the biggest we have at the barn but the biggest one is really a round arena, I wouldn't classify it as a round pen.
Anywho I stood in the center for 13 min (yes I calculated) texting and on facebook while Henry ran around, called and bucked. I decided that he needed to get his wiggles out before he was going to listen to me so I waited patiently haha.
After he was done I worked him in each direction working on our voice commands. I didn't have to do much since he kicked his own butt with his 13 min workout! He was more then happy to do the downward transitions which are normally what we have to work on. He is a rock star going up in speed.
After our lunge sesh I took him for a walk and he was really good. At times he was distracted and forgot I was there but quickly came back to me and I was very proud. Then I was even able to hose him off alone at one of the free standing hoses so he wasn't tied to anything and he was a total gentleman and didn't dance (well except when I did his face but even for that he was good).

Anywho here is a picture of Bayley all cuted up in her doggie costume! All night she was giving me this look- she was so confused by my Wheres Waldo glasses :) 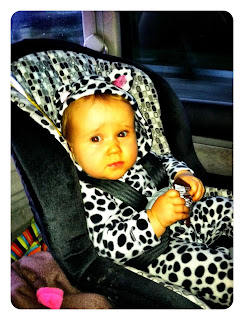