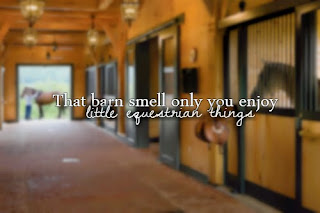 Thanks for all the nice comments about coming off :)

I am grateful that Henry is ok (it was super uncharacteristic of him to get tangled up) and that it was no big deal... I was more sore from the hard workout during the flat part of the lesson then the fall haha!

Friday Henry had the day off, lucky dude.

WS rode him Saturday and she and trainer said he was awesome. They jacked the jumps up and apparently he was perfect, proud mom :)

Sunday he got some turn out...

Monday I hacked. There was a lesson going on and another person hacking so I just tried to stay out of the way ha!

Henry is so heavy on the left side so I continued some of the flat work we did Thursday in my lesson to the hack, lots of counter bending to the left while tracking right.

It was SO windy outside and I was surprised that he was as good as he was with no lunging and having not been ridden the day before. Thanks Henry :)